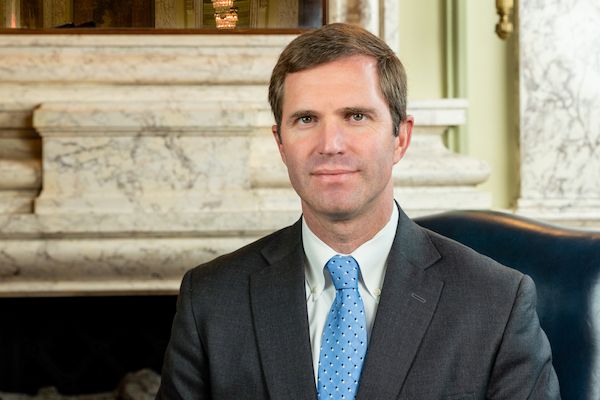 Andy Beshear grew up in Fayette, Franklin, and Clark counties and graduated from Henry Clay High School.  He is the son of Steve and Jane Beshear, the 61st Governor and first lady.  Along the way, they instilled in Andy the teachings of Andy’s grandfather, a Baptist minister from Dawson Springs, Kentucky, including the values of family, faith, and public service.

After marrying, Andy and Britainy moved back to Kentucky and Andy continued his legal career at Stites & Harbison, where he was recognized as the nation’s top consumer lawyer by Lawyer Monthly and received many accolades for his litigation work.  Andy also tailored his practice to represent non-profit youth organizations, helping implement background checks and other protective measures to keep kids safe.

The values Andy learned growing up, his experience as a private practice attorney and his commitment to his community led him to run for and become Attorney General in 2016.  In his role as Kentucky’s 50th Attorney General, Andy fought tirelessly for our families.  He fought against the opioid epidemic, suing opioid manufacturers and distributors that flooded our state with pills; creating the Kentucky Opioid Disposal Program to remove unused opioids from Kentuckians’ medicine cabinets; and investigating and prosecuting rogue doctors and drug traffickers.

To protect the Commonwealth’s children, the Office of the Attorney General, under Andy Beshear, arrested record numbers of child predators and trained thousands of Kentuckians on how to recognize, report and prevent child abuse and human trafficking.  Andy worked diligently to protect seniors from scams, fraud and physical and financial abuse.  He was a leader in the fight to protect access to health care and to manage the rising costs of prescription drugs.

As Attorney General, Andy made it a top priority of his office to end the state’s rape kit backlog, seeking justice for victims of sexual assault.  Through settlements, he secured millions of dollars in funding to get kits tested and to make much-needed upgrades at the Kentucky State Police crime lab, and he launched one of the nation’s preeminent cold case units to investigate and prosecute cases.  As a result, Kentucky is one of only a few states to have now tested every backlogged kit.

Andy Beshear was an independent voice as Attorney General and fought to uphold Kentucky’s constitution and laws.  He stood up for higher education and hard-earned pensions.  He knows when state government operates in secret, it is not working for the people and that is why Andy is committed to an open, transparent and inclusive administration.

Andy and Britainy have two (2) young children, Will and Lila.  The family attends Beargrass Christian Church, where both Andy and Britainy serve as deacons, and they volunteer with several local organizations.